Crime prevention is part of a police department’s job responsibilities, along with creating safer communities for its residents.  Collaboration between the two is essential for the process to be successful.  This collaboration is the basis for community policing and working together to reduce crime through problem-oriented policing or POP.  In this paper, three popular POP models will be examined for strengths and weaknesses.  The discussion will improve on the weaknesses and revitalize the model’s effectiveness through SWOT analysis concepts.  This collaboration will examine how their conjunctive usages may help reduce crime in our communities.

Crime prevention is an approach for reducing individual and community risks of becoming crime victims (Dempsey & Forst, 2010).  Education is one key factor to reduce crime, but it requires the collaborative efforts of police and the community in order to be successful.  This collaboration between the police and community formed the foundation for current community policing practices.  One major crime prevention tactic with community policing is the establishment of neighborhood watches.  This program has been around since the 1960s and promoted citizen involvement to help reduce crimes (Bennett et al., 2006).  Police cannot be everywhere at once, so this program enlisted the help of its citizens in different communities across the country.  A proactive response is more effective for crime reductions than a reactive response.

This approach sees improvements shifting from reacting to crime to becoming more proactive toward a systematic approach dealing with specific crimes in each community (Sidebottom & Tilley, 2010).  The implementation of crime mapping helps law enforcement agencies provide individual communities with important data about recent criminal activity in their area.  After the crime and specific locations are identified, a proactive response can be implemented.  This proactive response to crime is the basis for problem-oriented policing or POP.

The day-to-day efforts of crime prevention manifest as one of the police department’s job responsibilities.  A key concept lies in the establishment of POP.  Problem-Oriented Policing (POP) focuses on issues or problems differently based on each individual occurrence (Goldstein, 1999, 1990; Hoover, 1992; Lab, 2014; Rojek, 2003; Scott, 2000). It also fosters collaboration throughout the different sectors and divisions within each police department or agency.

CompStat is an example of interdepartmental collaboration and POP in action.  CompStat analyzes criminal complaints or arrests from a department’s individual data files; thus, using comparative statistics (Dempsey & Forst, 2010).  Crime is identified throughout the city and action plans are implemented to resolve the issues.  These plans are created by a police department’s commanding officer and specifically address the crime in that area.  One plan may be a directed patrol effort involving officers on special assignment.  This is where officers target a specific area because of an increase in residential burglaries or a saturation patrol for a specific area and they enforce zero tolerance policies.  During the POP phase, different models have been adopted for crime prevention and reduction efforts.

SARA is a problem-oriented policing strategy. This acronym stands for Scanning, Analysis, Response, and Assessment (Eck & Spelman, 1987; Dempsey & Forst, 2010; Goldstein, 1990).  During the scanning phase, a problem or crime is identified.  The analysis phase examines what caused the crime or situation.  The response phase creates and initiates a plan.  Finally, the assessment phase measures the impact of the response and determines if the problem has been resolved or if the analysis phase needs to be reimplemented for more effective results (Eck & Spelman, 1987; Dempsey & Forst, 2010; Goldstein, 1990).

Prior critics of SARA describe four weaknesses about this POP strategy:  1) over-simplification of the process, 2) the undermining of partnerships & collaboration, 3) linear process over non-linear, and 4) too loose and flexible (Read & Tilley, 2000; Ekblom, 2002, 2011).  Other critics say the analysis and assessment steps of SARA are the most difficult to apply and have trouble “filling the gaps” (Sidebottom & Tilley, 2010).  This is where a SWOT analysis can improve on the SARA model’s weaknesses, specifically in the areas of analysis and assessment.  This suggestion is illustrated in Figure 1. Because of perceived weaknesses with the SARA model, other crime prevention practitioners created their own POP strategy. 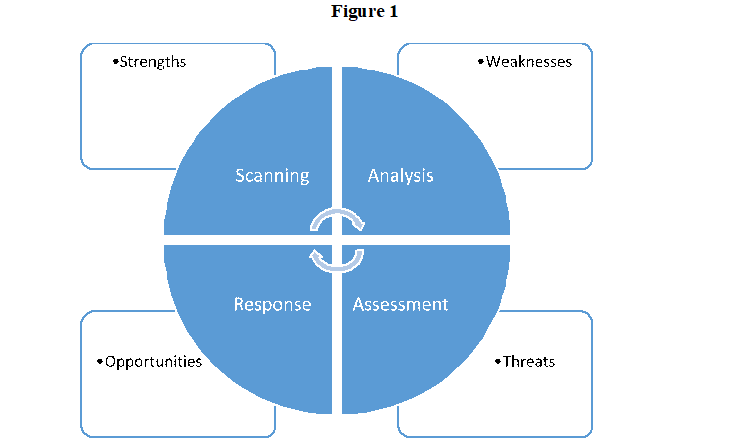 Some critics note the 5Is Framework is hard to remember and too complex (Sidebottom & Tilley, 2010).  This is where a SWOT analysis can improve on those weaknesses, especially in the implementation and impact stages. During the implementation and impact stages, the strengths, weaknesses, opportunities, and threats can be evaluated with a template like the one shown in Figure 2. Still, other critics saw gaps in the 5Is Framework; therefore, another POP model was created.

Identify the demand-Where or who it is from?

Drivers-What people want and why?

Aim-What do you want to accomplish?

Research and analysis-What happened and why?

Think creatively-What are your options?

Negotiate & initiate responses-How and When?

Evaluate-Did you achieve your goals?

SWOT is a strategic planning method used primarily for business analysis, but its concepts can be applied to crime prevention and problem-oriented policing. This acronym stands for Strengths, Weaknesses, Opportunities, and Threats (Addams & Allred, 2013; Bryson, 2011; Jonassen, 2012).  The strengths and weaknesses are usually similar in nature and generally created from internal factors.  On the other hand, the opportunities and threats are also similar, but come from external factors.  If used correctly, the SWOT analysis process can foster collaboration and create great brainstorming sessions.  This process could improve CompStat meetings and help organizations reach their desired crime prevention goals.

During the analysis stage in the SARA model, this is where the SWOT analysis should be implemented.  An example would be examining residential burglaries as our problem or area of increased crime.  What are some of the internal strengths and weaknesses with the burglary analysis?  One strength for a police department may be that they have a burglary unit or directed patrol unit that a commander can utilize with saturation or directed patrols in the area to apprehend the suspects.  In contrast, this could be a weakness if these resources are not available within the police department.

The opportunities and threats are external factors at the advantage of the suspect (s).  Does the neighborhood provide proper lighting at night or is it located in a high crime area?  Is there an established neighborhood watch, or was someone with a burglary arrest history recently released from prison and living in this area?  The opportunities could also be possibilities for improvement acknowledging perceived threats.  There are numerous ways to plan strategically using both SARA and SWOT to improve any criminal situation; furthermore, this same scenario can also be applied to the 5Is Framework and ID PARTNERS model. 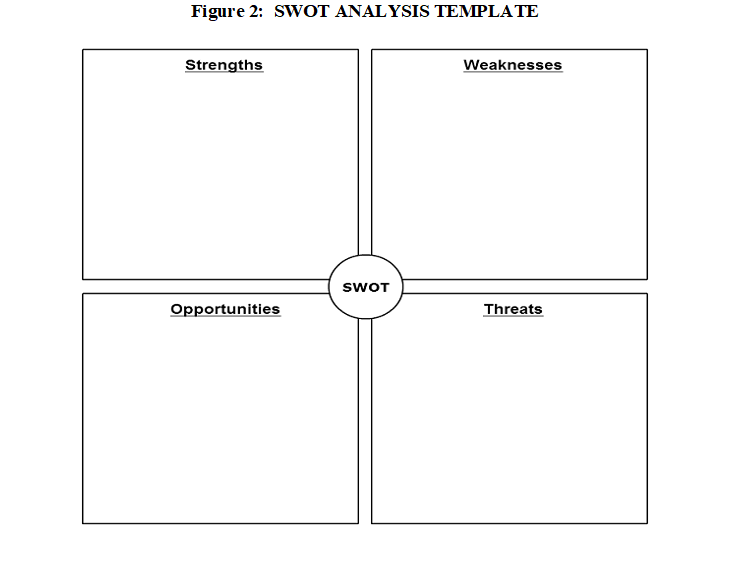 Crime prevention is an important process for law enforcement agencies and communities; however, several factors can affect crime with positive or negative results.  The main concept is that law enforcement agencies and its residents agree on what is best for their individual community.  After a mutual agreement is reached, there should be a collaborative effort working toward the desired crime prevention results.  The SWOT analysis concept is a great way to constructively analyze crime and propose proactive plans for any community.  Even though a plan has been implemented, it must be monitored and possibly reimplemented for the desired effects.   Again, this is where the strengths, weakness, opportunities, and threats can constructively be identified.  SWOT analysis should be an important part of any community policing program and the forefront of crime prevention efforts.

Due to recent confrontations involving police and some minority communities, there has been a call for criminal justice reform in the U.S.  These reform suggestions could benefit from utilizing SWOT analysis concepts in order to achieve positive remodeling outcomes.  The SWOT concepts presented in this paper advocate potential areas for future research focusing on our current POP Models and possible improvements to the existing criminal justice system in the U.S.

Ekblom, P. (1999). Can we make crime prevention adaptive by learning from other evolutionary struggles? Studies on Crime & Crime Prevention 8, 27-51. 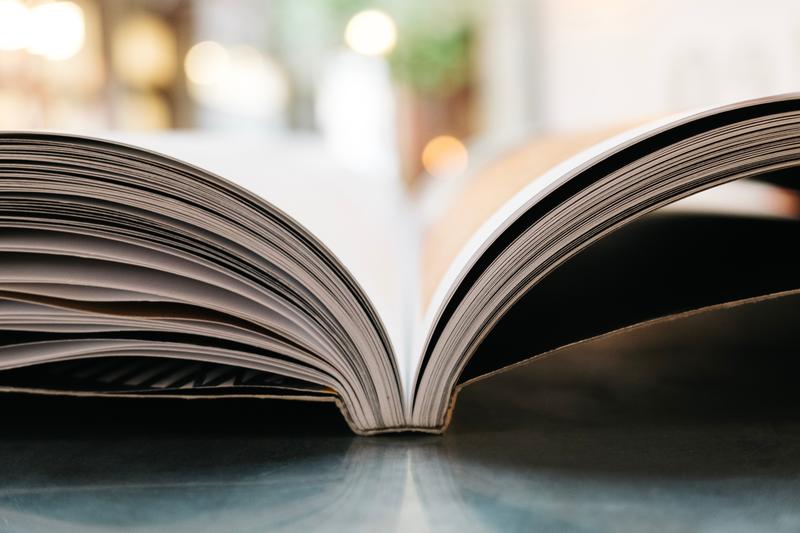